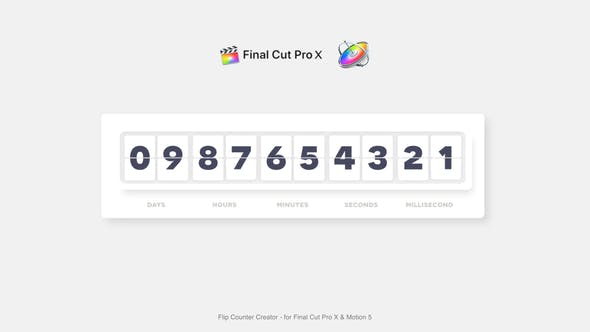 Create a stylish flip panel, quickly and easily with these construction kits for FCPX 10.3.0 or Apple Motion 5.3 and higher. Easily customizable, fully supported!

Choose your color, customize design elements, change the size, position, rotation, edit the number of tablets, put your own background, and, of course, change the values with just a few clicks.

Customize and combine elements easily with a control panel.

Flip Counter Creator – pre-animated panels with placeholders. Two versions included (animated from the left to right and from the right to left).

Possibility to add text instead of numbers. Up to 10 tablets.

Possibility to add text instead of numbers. Up to 10 tablets.

Set your own values for the “months”, “days” and “hours” panels. Minutes and seconds are pre-animated up to one hour.

Pre-animated only hour, minutes and seconds panel (months, days and half of hours tablets are not animated).

Flip Counter – pre-animated flip counter up to one hour with settable “months”, “days” and “hours” panels.

Set your values for the “months”, “days” and “hours” panels. Minutes and seconds are already pre-animated up to one hour.

Pre-animated only hours, minutes and seconds panel (months, days and half of hours panels are not animated).

● Resizable resolution, easy to change the size of elements without loosing quality

● On Screen Controls will help you to customize standard properties like scale, position or rotation in few clicks

● Trim the duration of elements right on the timeline panel

● You can use this elements with photo or video on the background, alpha channel is supported

● Works with any language software